So when I found out I was having triplets a friend of mine (without kids) exclaimed “you are going to be so fast…don’t you know you get faster after you have a baby?  And you’re having three!”

“Really?” I replied – I’ve never heard of that.  But now I’m starting to wonder.  I don’t train as hard or as much as I used to and based on my last two race results I’m as fast if not faster than I used to be (at least running and biking).  Swimming’s another story…it’s harder to get to the pool with three little ones.

Maybe it’s pushing the triple jogger, but to be honest I don’t run with it that much since it’s sooo hilly around my house.  Maybe merely having babies physiologically changes you?  I have no idea…I’m not a doctor.  Maybe it’s the carrying around 20-25 lb weights (babies) constantly and running around after them.  This is my best guess as to why I’m stronger now versus my pre-baby era.

Regardless, I’m enjoying feeling strong and fast.  I had a great race at the Mossman Sprint Tri this past weekend.  I had a solid swim, strong bike (including a mechanical issue)  and I had my best run split ever and ended up winning the women’s race by over 3.5 minutes! 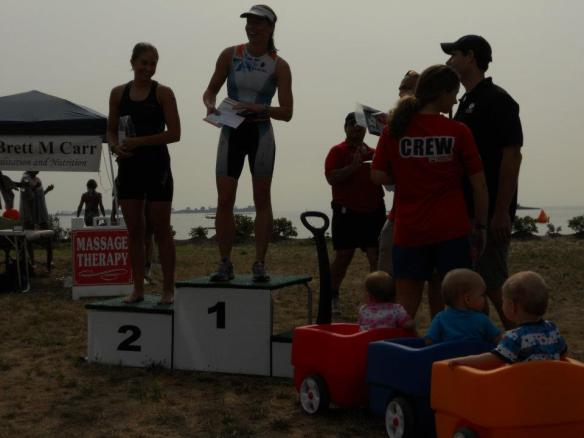